I will write to Martyn with pleasure, but I don't think there is the least use in doing so. Martyn is an intelligent fellow, very intelligent, but when there is any question of religion he ought to be under lock and key. After the letter from him which I send, it would be difficult for him to go back upon it.

Huysmans' article I thought admirable, one of the best things in the Revue that I have read.

I am genuinely grateful to you and Wyzewa for the excellent and amusing article on "A Mere Accident."

The book has not been understood as I could have wished either in England or in France, so that I must have made a mistake somewhere — Wyzewa has I think given me a hint where the mistake is. I will write a new ending when there is another edition, or rather I will carry the story a little further.

The conclusion of your own novel is very good indeed, and adorably written, especially the description of the woman asleep. But Rosny's story is vulgar and the writing abominable. (1) Rosny is obviously uneducated. "La Terre" makes me smile.

My new story "Spring Days" is to appear in a daily paper, the Evening News. If I can, I will begin it by the end of February, and I am working now like a nigger in order to be ready.

The story will be as simple as "A Mere Accident" was complicated. Would you like it for the Revue Indépendante ?

Translated by Wyzewa or by Debussy, whose version of Rossetti's poem was so good, my story would not I think be out of place in your review.

Rosny certainly achieves something unique in the style of his novel. It looks as if he had taken a note of curious phrases in Zola and Goncourt, and made it his sole aim to find a place for them. The concluding sentence of the novel, for instance, is an absurd pastiche, but when he attempts an original phrase like "opéra végétal" the absurdity is supreme. (2)

There is little or nothing to correct in the June number ; as to the rest, I will revise it on the proofs of the book. It is all very well for you to ask me to limit myself to correcting mistranslations and to refrain from recasting phrases, but you ask the impossible — an insufficient phrase is a mistranslation because it does not convey my thought.

Your translator is an odd fellow ; sometimes he is very good, and then suddenly he makes me ridiculous. "The Woman of Thirty" [Note : Chapter of "The Confessions of a Young Man".] is all right, and I request that you will leave it as it stands, or very nearly so. I have my own way of expressing myself.

In the April number, for instance, I try to remember a passage in Gautier ; if it has mistakes in French, correct them, but don't think it necessary to look up "Mlle de Maupin." Rosny's prehistoric scenes are really good (3), but Adam's story in the June number seems to me to be absolutely ridiculous. Or is it a deliberate caricature ? At any rate, I could make nothing of it.

Did "The Mummer's Wife" reach you ? I sent the English book to Rosny.

This is how things stand with me at present. Felix Juvin — I have not his address here but you know it — is greatly interested in my writings. He has read, or rather his translator has read "Esther Waters" and "Evelyn Innes" — the re-written book.

He admires both, but he wishes particularly to bring out "Esther Waters." He has written to me several times "give me the rights, and we will proceed at once with the translation"; and I have replied that I cannot do so, as I gave the rights of translation several years ago to M. Rosny.

I told him also that my transactions with Rosny are in a hopeless mess ; Rosny declared that he had done a translation, and that it had been refused by all the journals and all the publishers. Stock nevertheless, when I mentioned the matter to him, offered at once to do the book, but after a talk with Rosny, he refused point blank, and in a manner which indicated that he had reasons of his own for his refusal.

All this is hypothesis ; what is certain is that Felix Juvin wants to bring out the book, and I wrote to him telling him to come to an amicable arrangement if he can do so. I think the copyright of "Esther Waters" is out, but "Evelyn Innes" still belongs to me, or rather to you.
If you like I will tell Juvin to give you the manuscript, and I beg you not to lose it as it is the only one I have of the re-written book.

And now, my good friend, a word of advice. Don't trouble yourself about translating my books ; there is no rnoney to be gained with them, of that I am nearly sure, and may even not find a publisher. Think then of the time you would have lost. Another piece of advice. Tell your collaborator to glance over the first version of "Evelyn Innes," for possibly it is better than the second. Send me a line, and I will write to Juvin. [...]

You are quite right in saying that I speak French very badly, but this letter seems to me to be pretty well written. Perhaps the air of the Isle of Wight agrees with my literary temperament. If it continues to do so I will take up my abode here. 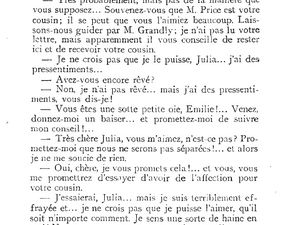 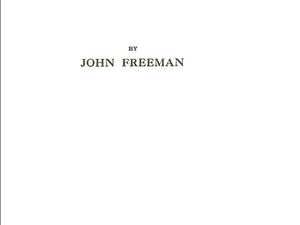